The João do Vale Theater is one of the few spaces for artistic presentations in São Luís.

The building where it works was, originally, a shed that served as a sugar warehouse owned by businessman Rocha Aguiar.

Located in Largo do Comércio (Rua da Estrela), the shed was built in the 1950s and only in the late 80s received the function of theater.

At first glance, it is thought to be a colonial houses, mainly due to its address and the style of its facade, mistake.

The João do Vale Theater is nothing more than a pastiche. Due to its strategic location, the building was acquired by the State Government in the administration of Epitácio Cafeteira, during the execution of the Reviver Project, being adapted so that it resembled the neighboring houses and did not clash with the architectural complex of Praia Grande. 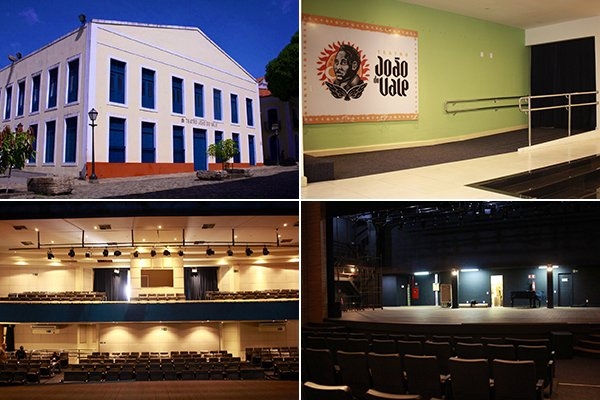 João do Vale Theater in São Luís do Maranhão

Thus, to its new façade, a triangular pediment was added and inside it were installed bathrooms, a stage and an administration room. Painted yellow, at that time it received the nickname “Teatro Canarinho”.

On December 18, 2001, the theater was reopened after a new renovation, in which it was baptized with its current name, having in its foyer a bust of the honored singer and composer from Maranhão. Modern equipment for scenography, sound, acoustics and air conditioning were acquired.

That same year, João do Vale was adopted by the state government as a laboratory for the Actors Training Course at the Maranhão Center for Performing Arts (Cacem), in addition to being the stage for important artistic presentations and festivals.

But in 2006 he left the agency, becoming the responsibility of the State Secretariat for Culture (Secma).

The artist – The musician, singer and composer João Batista do Vale better known as João do Vale was born on October 11, 1934, in Pedreiras, Maranhão.

From humble beginnings, João always liked music a lot, when he was 13 he moved to São Luís .

In 1964 he made his debut as a singer. His main compositions are: Carcará in partnership with José Cândido and immortalized in the interpretation of Maria Bethânia, Peba na pepper with Adelino Rivera and Pisa na fulô with Silveira Júnior. João do Vale died on December 6, 1996, in the capital of Maranhão.