Rua do Giz, which was once the setting for a soap opera, once housed an important economic corridor, and in opposition to that, it was also the cradle of bohemian life in Sao Luis do Maranhao.

Among the alleys of the city's historic region, Rua do Giz (or 28 de Julho) draws attention for its architectural ensemble and for its social importance within the city's daily life.

Taking a long extension of the former parish of Nossa Senhora da Vitória (today the neighborhood of Praia Grande), it started at Largo do Palácio and ended at Rua Nova Cascata.

After the urban reform that landed Largo and a section of Rua de Nazaré, today the street starts at Nazaré and ends at Rua Jacinto Maia, parallel to Convent of Merces.

The set of slopes and stairs was named “Giz” in reference to “the steep and slippery clay slope, which made traffic difficult, so it received the staircase that corrected the defect”, as explained by researcher Carlos de Lima. 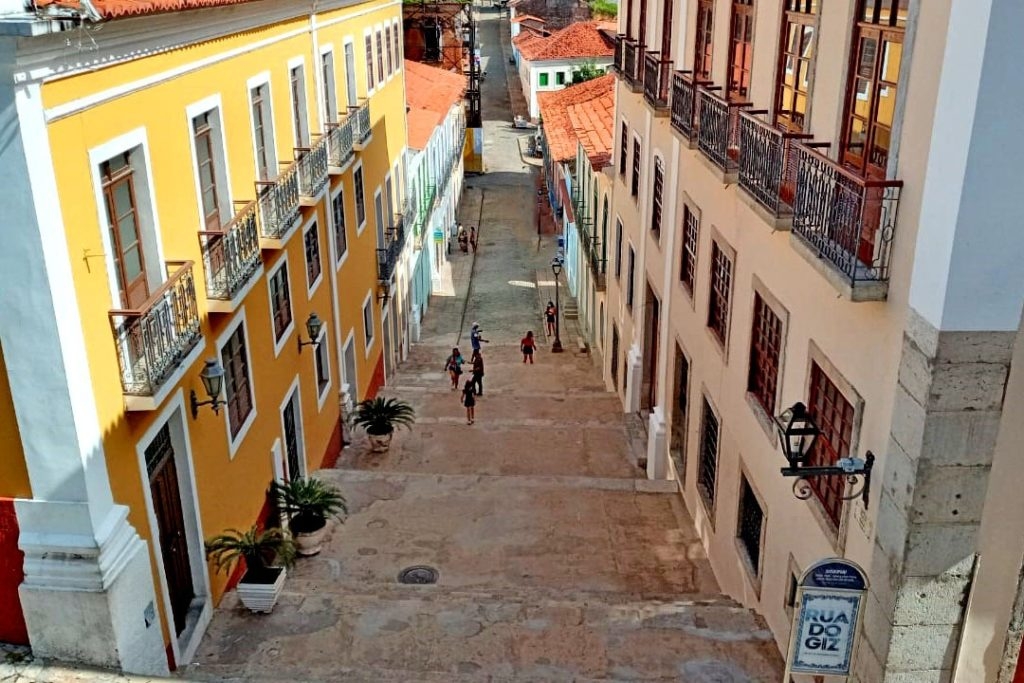 Rua do Giz in São Luís do Maranhão

The name “28 de Julho”, according to Domingos Vieira Filho, came from “Antonio Henriques Leal when he was a chamberlain in 1865”. The appellation is a reference to the date of Accession of the Province of Maranhão to the Independence of Brazil in 1823.

Rua do Giz still retains characteristics of the time when, alongside streets Palma, Estrela, Saúde, Afonso Pena and Travessas da Lapa, Feliz and Portinho, formed the Baixo Meretrício zone (ZBM). The set of public places was stigmatized as a space of debauchery, prostitution and trickery, going through two distinct moments.

According to professor Marize Campos, the attempt to segregate a space in the capital for the activity of prostitution was part of a broader project, which had as its objective “the urban sanitation of São Luís, to which interests in moral sanitation were linked”. Ordering and civilizing the city presupposed to define a space of pleasure in the urban perimeter.

Since the beginning of the 1930s, the Ludovician prostitute became the target of interventions by the government. From September 1931 onwards, “day and night rounds [inspections] of the Civil Guard were carried out in the houses of prostitution […]

In São Luís, the interferences were, at first, verified in the imposition of limits on the circulation hours of the harlots in the city's territory”.

During this period, the region was defined by regulars and residents by the glamor that its nightclubs and venues installed there had. These regulars were part of the Ludovician elite.

And they were there because the courtesans are well dressed, the halls had good quality music with the best musicians in the city, which granted the owners of the establishments the status of “madames” of great power and respect.

Big houses on Rua do Giz

The second moment dates from the 1980s and marks the decay of the ZBM. The madames became old prostitutes, full of children and, for the most part, in great financial difficulties.

The glamorous nightclubs today are nothing more than poorly maintained mansions turned into tenements to house large families.

The colonial houses on this stretch of Rua do Giz contrast with some of the most beautiful and imposing houses in the street, home to distinguished and important businesses in the city.

Among them, Solar da Baronesa de Anajatuba, where the Institute of Historical and Artistic Heritage of Maranhão (Iphan) is located today, and the manor house of musician Lilah Lisboa, home of the Maranhão School of Music.

The first called “Trojan Horse”, as it is one of the tallest buildings in this area, has four floors, ending in eaves, with a symmetrical facade facing west.

The second building has three floors made up of stone walls from the colonial era and Art Nouveau decorative elements from the early XNUMXth century, brought to São Luís by the Italian architect Gaspar Iconazone. Its façade is set back from the surrounding buildings, surrounded by a hollow wall with circular modules.

There were also stores and banks on the street, such as Machado Cavalcanti & Cia, which sold imported food products such as olive oil, cod, soft drinks and chocolates. Or like Batista Nunes & Cia that worked with the sale of offal, stowage and cigarettes.

Banking houses were represented, among others, by Banco Comercial do Maranhão, Banco do Maranhão, inaugurated in 1855, and the famous Banco Comercial. There were also credit institutions, such as Ferreira & Cia, located in building number 5, which offered commission and consignment services, and Viana & Santos, located in number 9.

Today, the street is a space for restaurants, hotels, museums and culture houses, such as the Popular Culture Center Domingos Vieira Filho, the Casa da FÉsta and the Natural History and Archeology Research Center of Maranhão. Soon it will also house the Museum of the Portuguese Language – Maranhão.

São Luís do Maranhão and Northeast Tourism and Travel Guide