The Sete Cidades National Park, in Piracuruca, about 200 kilometers from Teresina in Piauí, it houses around 500 cave paintings on one of the large rock walls, which date from 6 to 10 years ago and are preserved.

The Sete Cidades National Park in Piauí, created in 1961 and covering more than 6 hectares, is home to an extraordinary wealth of rock formations, rock art, fauna and flora.

In 6221 hectares of extension of the Sete Cidades National Park, impressive geological monuments and a rare archaeological heritage can be seen, amidst the fauna and flora of the transition area between the cerrado and the caatinga, at 22 springs and in the many small courses of water.

The first documents about the region date back to 1886, when Jácome Avelino, from Ceará, reported that “on a large plain is the place called Sete Cidades, which the adjacent residents have enchanted, and many versions of it are nothing but superstitions. ”.

Until today, there are several stories about Sete Cidades.

What is certain, however, is that the place is made up of sandstone rocks carved by the action of time and weather, and divided into groups – or “cities”.

The general landscape can be seen from the viewpoint of the Second City: there, to the traveller's fascination, forms similar to roofs, chimneys, castles, forts, houses can be seen, as well as figures of animals and people, especially mysterious at dusk, when the rocks reflect golden tones in play of light and shadows. Pedro II - The City of Opals 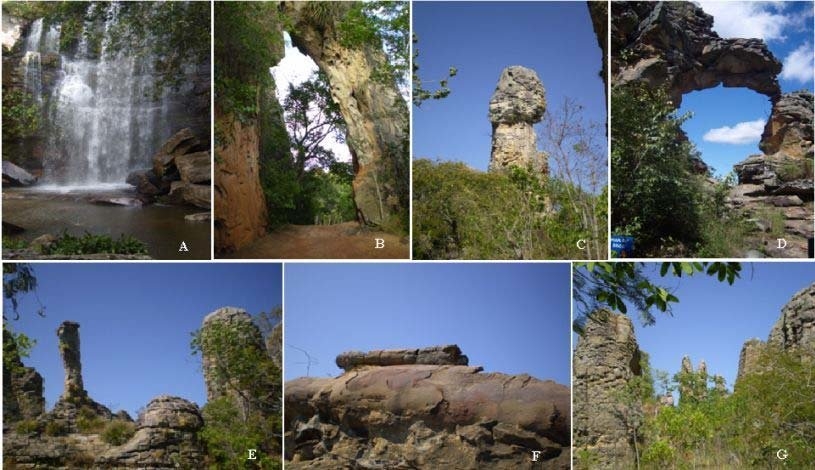 In addition to assuming impressive shapes, the rocks preserve rock inscriptions that are between 5 and 10 thousand years old: mixing shades of red and yellow, they represent geometric symbols and animals.

See the map of Piauí

The fauna of the place includes the wild deer, the paca, the small anteater, the iguana, the mocó, the armadillo, the agouti, the wild dog, and more than a hundred species of birds.

The vegetation, green between the months of January to July, turns yellow during the dry season, from August to November.

In dry areas, there are species typical of the caatinga, such as juazeiro, jurema, aroeira and cacti; near the springs, palm trees such as tucum, carnauba and buriti grow.

It is possible to visit the entire park by car, crossing its 12 kilometers in length in a period of three hours, including breaks for small trails.

However, visiting Sete Cidades on foot, in routes of three or six hours, can prove to be a beautiful adventure. There is also another option: renting a bicycle in the park.

For all alternatives, the tip is to enjoy the first hours of the day, when the sun has not yet warmed up.
Hats, comfortable clothes, sneakers and sunscreen are important items, as well as snacks and water.

It is mandatory to follow guides accredited by Ibama.

From Teresina, access to Sete Cidades National Park is via BR-343, following BR-222 to PI-111, which leads to the south entrance.

Those coming from Parnaíba can reach the park through the northern gate, passing through the city of Piracuruca (access via BR-343), 140 kilometers from Parnaíba. On both paths, pay attention to the animals on the track.

The best way to visit the hill – covered by Coluna Prestes – is accompanied by local guides.

The Seven Cities in Piauí

Here is located the waterfall of Riachão, with a drop of 21 meters. The rocks resemble twisted cannons.

Richer in cave inscriptions. In it are the rock called Arc de Triomphe (or Desire), 18 meters high, and a 45-meter high lookout.

Here are the Map of Brazil, the Head of Dom Pedro I and the access to the Hole Solstitial trail, where the incidence of the winter sun (June) causes a special effect.

Among the rocks, the ones that resemble two lizards kissing and the one that resembles the map of Brazil stand out.

Rich in rock inscriptions and rocky monuments, it groups, among other formations, the Indian cave and the Camel and Emperor stones.

The biggest attraction is the perfect polygons that form the Turtle Stone; in it are also found the stone of the Dog and the one of the Elephant with its cub.

A place where the rupestrian inscriptions are clearest, most of them in red. Among the impressive formations, the Casario and the grotto do Pajé stand out.

Pedro II – The City of Opals

Old, colorful and well-preserved houses, quiet, tree-lined streets and a cool mountain climate. Pedro II, located at the top of the Matões mountain range, at about 600 meters of altitude, 50 kilometers from Piripiri (via BR-343), has all this and more: it concentrates the only opal mines in America in its surroundings southern.

Transparent or opaque, opal is a rare stone that, when exposed to sunlight, reflects the colors of the rainbow. In every corner of the city there are stores that sell the gem. Among the best is Opals Pedro II (av. Cel. Cordeiro, 672, Centro).

In addition to mining, Pedro II stands out as a major producer of hammocks. The entire sewing process – from hand looms to embroidery and sewing – can be closely monitored at the Handicraft Workshop (pҫa Domingos Mourão Filho, 329, Centro).

But there are still other attractions, such as the Winter Festival, during the month of June, on the Corpus Christi holiday, with jazz and blues shows, and the Morro do Gritador, from whose viewpoint at 720 meters high, you can see Pedro himself. II and its neighbor Piracuru.