The Arthur Azevedo Theater, one of the most beautiful postcards and important show house in São Luís, as well as most Brazilian theaters built in the XNUMXth century, was built to meet the desires of the small bourgeoisie of Ludovica at the time that, enriched by the prosperous cotton production in the state, wanted to see in the city a space for performing shows of dramatic art and lyrical music of quality and in suitable conditions as in the main cultural centers of the world.

On the initiative of Eleutério Lopes da Silva Varela and Estêvão Gonçalves Braga, wealthy Portuguese merchants who settled in the region, the theater, the fourth built in the city, began to be built in 1815 in one of the noblest areas of the capital of Maranhão, in at the time, the fourth most important Brazilian city. 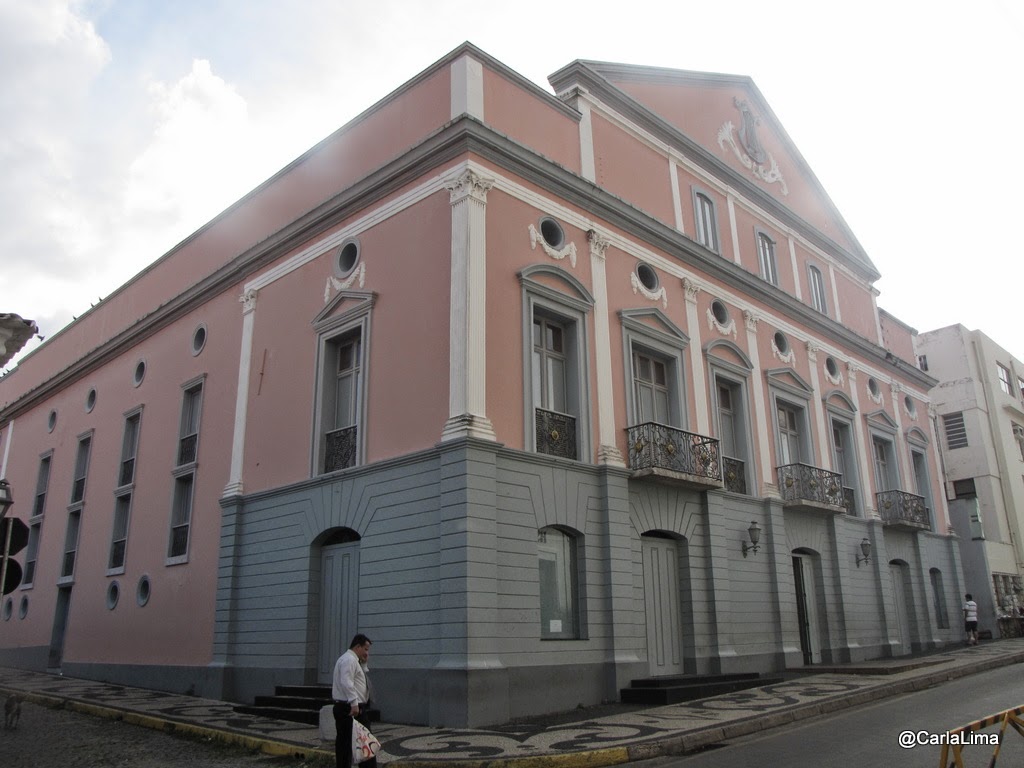 The original plan of this great show house planned to open the doors of the temple of art to the noble Largo do Carmo / Praça João Lisboa, with Rua do Sol e da Paz on either side, where an imposing façade would show all the grandeur of the work, and at the back, Travessa dos Sineiros.

Get to know the João do Vale Theater in São Luís.

But anyone who knows the city knows that the Church of Our Lady of Mount Carmel, which housed the priests of the Carmelite Order.

And it was these neighbors who created an obstacle to the construction of the theater that had already begun, alleging that it was inappropriate for the church to have a profane theater in the vicinity that would confront religious values.

The legal dispute lasted for some time resulting in the embargo of the work.

In order not to displease the population, which so desired the space, Judge Antônio Ferreira Tezinho, also a priest, allowed the continuity of the work by imposing some conditions that disfavored, in a way, the sumptuousness of the artistic temple.

The theater was then rebuilt in 1816 with its main facade facing Rua do Sol, as we know it today, losing the city's natural ventilation.

The building, however, was cramped, squeezed between other constructions, with high-traffic streets at the front and sides, which caused consequential and disturbing noises, in addition to parking difficulties.

Even so, the theater, the only truly neoclassical monument in the city, was seen as a tasteful environment by Ludovicans.

Namely, the neoclassical style is spread to Brazil through the French artistic mission brought by D. João VI in 1816.

Inauguration – It only took one year for the theater to open its doors.

On July 1, 1817, Teatro União was inaugurated, two years after the inclusion of Brazil in the United Kingdom of Portugal and the Algarves, a fact that gave rise to the name of the building.

Based on the so-called Italian audience theater, in horseshoe format, the house consists of a central space, with an excellent front view angle, and four orders of vertical spaces: frieze, box, balcony and gallery, in addition to a government box, having a total of 800 seats, which accommodated 5% of the local population at the time, which they could check out the famous French, Portuguese, Italian and Spanish companies in their heyday.

Since its inauguration, União has gone through golden times and major crises, closing its doors for long periods. In 1852, the house changed its name to Teatro São Luiz, with the arrival of a dramatic company from Portugal.

In 1854, on the night of April 26, the first masked ball was held there, an unprecedented event with great repercussion in the province.

That same year, on June 21, the place would serve as a cradle for Apolônia Pinto, the daughter of a Portuguese actress who went into labor in full theater.

In dressing room number 1, one of the great actresses of Brazilian theater was born, who already at the age of 12 enchanted audiences with the play “A Cigana de Paris”.

A little over 65 years old, Apolônia Pinto is forgotten at the Retiro dos Artistas in Rio de Janeiro, dying in November 1937 at the age of 83.

Apolônia Pinto's remains are kept in the Theater itself, on the ground floor, in a niche giving access to the audience. There, the actress was also honored with a bronze bust and a plaque alluding to her brilliant cultural trajectory, located in dressing room nº 1.

The definitive name, Teatro Arthur Azevedo, came in the 20s, during the government of Urbano Santos, in honor of the illustrious and brilliant playwright from Maranhão, Arthur Nabantino Gonçalves Azevedo, one of the exponents of Brazilian theatrical literature.

In moments of crisis, the theater also started to function as a cinema, in addition to undergoing restorations that ended up decharacterizing some of its elements.

In the 60s, Newton Bello's government ended the contract with the Mattos Aguiar film company, which had leased it, and reverted the house to state patrimony.

Renovations – In 1969, after a long period of renovation carried out by the José Sarney government, the Arthur Azevedo Theater was again handed over to the public, with the staging of João Mohana’s play “Abraão e Sara”, staged by amateur artists from Maranhão – at that time, the house was presented with its famous chandelier, a gift from the then First Lady Marly Sarney.

Under Edison Lobão, a major renovation and restoration project was carried out, placing the TAA among the most modern and well-equipped in the world.

The first stage involved historical research to reconstruct the original details, the second began with a modernization of the stage, restoration of the audience and construction of two annexes, where the administrative and service parts work.

The house reopened in late 1993 with several changes. The last renovation took place in January 2002.

History of the Arthur Azevedo Theater in São Luís do Maranhão