Chapada Diamantina, in Bahia, has several attractions for sports and adventure lovers.

Among them, the main ones are certainly the famous waterfalls, some considered the highest and most beautiful in Brazil.

One of the most famous natural parks in the country is the Chapada Diamantina, destination for nature lovers and adventure tourism.

It is located in a region of mountains full of rivers, which culminate in beautiful waterfalls and numerous natural pools. It was created in 1985 and covers the municipalities of Andaraí, Ibicoara, Iramaia, Itaetê, Lençóis, Mucugê and Palmeiras.

The region has the highest altitudes in the Northeast, reaching 2.033 meters at Pico do Barbado. The vegetation mixes species of the caatinga and the mountain flora.

5 waterfalls you need to know 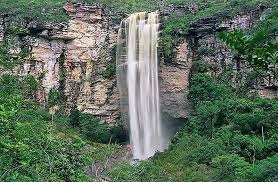 5 waterfalls you need to know in Chapada Diamantina

Knowing one of the main attractions of Chapada Diamantina requires courage.

It all starts with the beautiful road since Ibicoara (28 km of land), from where you can see huge mountains amidst the bucolic climate of the farms.

The car is parked at the beginning of the trail (an hour's walk), which follows a riverbed to the place where you can see the waterfall from above.

There begins the descent that passes through the Recanto Verde Waterfall – a thin veil of water that falls between the forest – and leads to the canyon where Buracão is located.

To see the fall from the front, there are two options: cross a footbridge and walk along narrow paths, always holding on to the wall; or swimming (guides provide life jackets).

The scenery is impressive: a hole in the middle of the rock and the drop that forms a huge pool.

Cachoeira do Ramalho is one of the most beautiful in the region and has two options of medium difficulty trails.

Among the most beautiful waterfalls in Chapada Diamantina is the Cachoeira do Ramalho, located in the municipality of Andaraí.

In addition to the incredible scenery, it is formed by the Baiano River and has a jump of about 60 meters high.

According to Cifa brigade member Homero Vieira, the waterfall has trails below and above, which are considered medium level.

Below, there is still attraction of the spinner, while at the top it is possible to find even more three waterfalls, which are known as the three falls of Ramalho, with about five to ten meters.

You can do it from below and go up to the other three waterfalls by a trail in the mountains where we find stairs that facilitate the ascent or descent.

The access trail starts at the Europa settlement and is 4,5 kilometers long.

This trail is the one with the lowest degree of difficulty, most of the path is flat and within a forest area.

The waterfall is on the border of the PNCD with the Municipal Natural Park Rotas de Cachoeira (PNMRC) and is in the municipality of Andaraí.

located at Mucuge, the waterfall is about 7 kilometers from the center and offers a natural hydromassage.

One of the most accessible trails for those who don't have a car and want to know a waterfall from the city of Mucugê, as they only need to walk 2km of unpaved road and already reach the trail, inside the National Park.

It is a 2km trail that can be done in 1h30min, slowly. Go up the mountain a little until you have a view from the viewpoint of the Mucugê River valley, the one that gave the city its name.

From there, it goes over the mountains, in an area with predominance of vegetation on top of the rocks (campo rupestre), permeated by centuries-old structures of old mines, as a tank, water diversion and a den that can be visited for rest and shade. All this subject to the interpretation of the garimpeiro culture by a qualified guide.

The waterfall is a wall of water +/-6m high, where the visitor can take a shower, stay behind the waterfall and swim in its well. Next to it, there is a good slab for resting, sunbathing and eating a snack.

The return can be made by the same trail, or the visitor can choose to go to the Tiburtino Waterfall, Piabinha Waterfall and Ever-Viva Project, all in Mucugê Municipal Park, or go up the Cumbucas River passing seven waterfalls with wells at different points, until reaching the Funis Waterfall and returning by another trail.

The Cachoeira das Moendas, one of the great attractions, is located approximately eight kilometers from the center of the city of Ituaçu and has more than 70 meters of waterfall – leaving tourists gaping. To get there it is necessary to hire a guide.