The North coast of RN is a sequence of villages inhabited by fishermen, always bordered by semi-deserted beaches, with dunes, cliffs and calm waters.

Genipabu: the most famous beach on the North Coast, its dunes up to 30 meters high are internationally known as a Christmas postcard. Genipabu is a mandatory stop for those who want to know the natural beauties of the region and is well structured to serve the tourist, offering several options for leisure and shopping. By buggy, the best view is from Lagoa de Genipabu, a freshwater lake surrounded by immense dunes. The beach is also known for the dromedary ride that starts from the top of the central dunes and for the extreme sports practiced on site, such as para-buggy (parachute pulled by a buggy and the original Esquibunda (wooden board imitating a ski that slides over the dunes to the seaside).

Barra do Rio: it is a small beach cut by the Ceará-Mirim River and offers the charming ferry crossing that leads to the continuation of the buggy ride along the North Coast.

Graçandu: it is also typical of Natal's summer beach and still retains its original features, with fishing villages throughout the region. The tranquility of Graçandu is ideal for those looking for a more romantic and isolated lodging script. Beach also ideal for extreme sports such as Jet-ski.

Pitangui: very busy in the summer, Pitangui has one of the most popular carnivals on the North Coast. The beach has a very developed real estate market and a reasonable urban concentration for the average of the region. The place also has one of the most beautiful lagoons in the state, Lagoa de Pitangui, a mandatory stop for buggys and which offers, among other attractions, the aerial cable jump (vertical dive lifted by cable from the center of the lagoon). Lagoa is ideal for a family program and has an excellent infrastructure of services and assistance.

Jacumã: It is also a summer option for families from Natal. The beach offers a calm sea with few waves and without much agitation. The attraction of the place is the Lagoa de Jacumã, where you can practice the fun skibunda and aerobunda.

Muriú: offers the visitor tranquility, shade from coconut trees and fresh water and is ideal for a weekend with the family. The natural pool, known as the “old woman's hole” is one of the attractions, but the beach also offers jet-ski and banana boat rides.

Barra de Maxaranguape: located in the municipality of Maxaranguape, the beach is bathed by the river of the same name. The place offers a picturesque setting, framed by the simple life of the local community. The bar has a lively carnival, but outside this time it is calm all year round, being a popular place for tourists and natives of Natal for the summer.

Cabo de São Roque: access is by ferry, departing from Barra de Maxaranguape. Cabo de São Roque is known as the true “corner of Brazil”, as it is the closest point to the African continent. The beach is worth it for its natural beauty and unforgettable images such as the São Roque Lighthouse and “Árvore do Amor”.

Ponta Gorda: it is the extension of Praia do Cabo and those who go along the edge by buggy can enjoy the immense coconut trees and cliffs. The place is almost deserted and offers a wonderful view of the coast.

Caraúbas: still retains characteristics of being a fishing village. The pools formed by corals deserve a stop for a calm bath.

Maracajaú: became an attraction for tourists for offering the famous parrachos, natural pools in the middle of the ocean, formed by the reefs and that can be visited by boat during low tide. The beach already offers greater infrastructure for bathers and the largest water park in the region is located there.

Pititinga: retains the charm of a fishing village, with dozens of coconut trees by the sea. A small lighthouse in the middle of the sea and the carcass of an old ship are unforgettable images of the place. The beach is also popular with surfers.

Punaú: it is a special corner of the North Coast. The meeting of the Punaú River, of dark waters, the sea and immense white dunes is unique. The place is a stopping point for buggy rides and offers a good leisure infrastructure. The corner of Punaú is perfect for a romantic weekend in the chalets between the river and the sea.

Zumbi: it is an isolated beach on the North Coast, little visited, except for families from Natal during the summer. The beach offers a still wild beauty, with immense coconut trees.

Perobas: also practically a fishing village, Perobas has a coastline almost untouched by tourist exploitation. For those who like more adventure and contact with the people of the region, it is possible to rent common fishermen's houses, negotiated on the spot, and experience the simple life of the people of the region for a few days.

Rio do Fogo: the municipality of Rio do Fogo on the North Coast has almost 10 thousand inhabitants, but despite the city that grew up around the coast, the seaside remains calm, being visited by locals and natives during the summer season.

Touros: the municipality of Touros on the North Coast of Rio Grande do Norte is a major development hub in the region. It is there that the largest lighthouse in Latin America, the Calcanhar lighthouse, and the picturesque Church of Bom Jesus dos Navegantes, built in 1800 can be found. attestation of Portuguese possession of the Brazilian colony, in August 1501. In the city is also kilometer zero of the BR 101, the highway that cuts across Brazil to Rio Grande do Sul, marked by the portico designed by the famous Brazilian architect Oscar Niemeyer.

Heel: at the tip of the heel is the largest lighthouse in Latin America and the second largest in the world, over 70 meters high. The lighthouse is open to the public daily from 9 am to 11 am.

Cajueiro: Cajueiro beach is another quiet corner of the coast, being little frequented by tourists. The place is a spawning point for sea turtles, an endangered animal.

Ponta de Santo Cristo: Ponta is still a fishing village, with an open and almost deserted beach. Ideal for rest, it is sought after by families from Natal during the summer.
From October to February: ideal for windsurfing and kitesurfing.

São Miguel do Gostoso: the municipality of Gostoso on the North Coast gained prominence due to the curious name given to the city and the beach. São Miguel has been developing rapidly and the strong winds make the place a popular spot for sailors and kite-surfers and windsurfers. The beach begins to offer some infrastructure for its visitors and is popular throughout the high season.

Redoubt: as the name says, it is a small and calm beach, in the extreme north of the North Coast of Rio Grande do Sul. Little visited by tourists.

Tourinhos: worth a visit, for the almost untouched natural beauty and the calm sea and white sand beach.
Marco

On the border with the state of Ceará is Marco beach. It was there that the Marco de Touros arrived and the place remains practically as it was 500 years ago, when the continent was discovered. The preserved place is a trip back in time. Quiet beach, little visited by tourists. 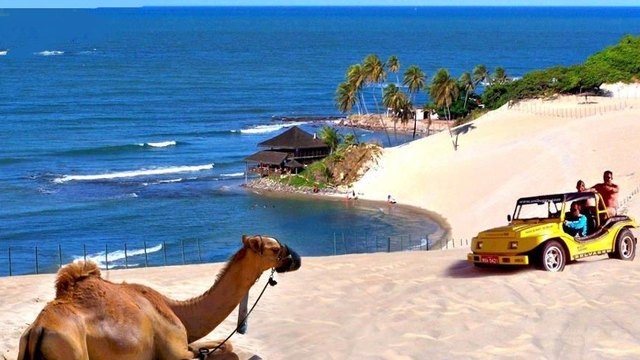 Touristic Route along the north coast of RN – Genipabu, Gostoso and Touros

The North Coast of RN has strong winds, sun, dunes, beaches, cliffs and the friendliness of the state accompany visitors throughout the coast. Many tourists who come to Rio Grande do Norte know the northern stretch of the Potiguar coast from Natal. Here, I invite you for an immersion […] 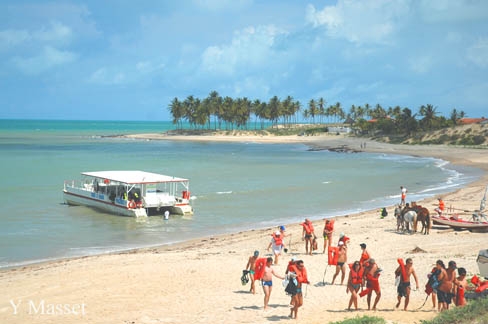 Transparent waters and a coral reef are the attractions of Maracajaú beach, which is 55 km north of Natal. One of the most impressive things about the beach is the color of the sea water. Maracajaú is the last beach in the municipality of Maxaranguape. The name of indigenous origin comes […] 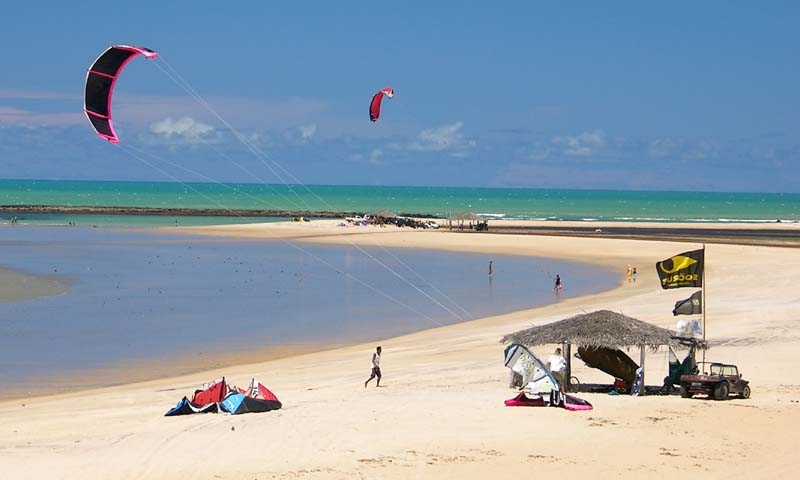 São Miguel do Gostoso has beautiful beaches and sports

São Miguel do Gostoso is a small paradise very close to Natal (108 km) and is considered one of the best spots in the world for water sports, the city receives wind and kitesurfers from all over. Every year, the city gains more visibility and new […] 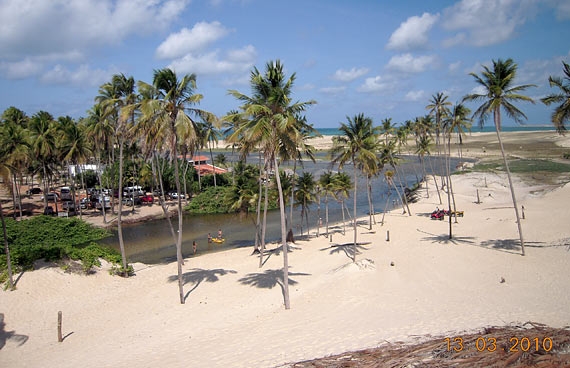 Rio do Fogo in RN has paradisiacal beaches, lagoons and preserved forest

The small town of Rio do Fogo, on the coast of Potiguar, has a deserted beach, beautiful coconut trees, warm water and lots of fun along the rivers and dunes. Praia do Rio do Fogo is located in the city of the same name, very close to Natal. The municipality of fishermen already has about ten […]

The north coast of Rio Grande do Norte has a rustic beauty that can be enjoyed on tours of one or two days, in buggies or four-wheel drive vehicles, to the border with Ceará. The approximately 250 kilometers of coastline are a sequence of villages […]