Delta do Parnaíba is located in a corner between the coast of Piauí and Maranhão, the Parnaíba river meets the ocean and forms the only open sea delta in all of America.

Water mirrors, mangroves, dunes, lagoons, wild animals, rivers and beaches with idyllic landscapes. All this with the sun shining bright all year round, this is the scenario that tourists will find in the Delta do Rio Parnaíba, an archipelago with an area of ​​2.700 square kilometers, formed by more than 70 islands, located on the coast of Piauí.

The tour through the archipelago in the Delta do Parnaíba starts at the Armadillo port, in the city of Ilha Grande, 9 kilometers from Parnaíba, the second largest city in the state and capital of the Delta, where every day at this time of year boats and boats take tourists to visit the ecological sanctuary of the region.

The tour along the coast of the Delta do Parnaíba is an unforgettable tour of Northeastern Brazil, an excellent option for wildlife lovers. “The tourist is enchanted by the nature we have, with the mangroves, dunes, fishing villages and the cuisine”, he said.

The country's shortest coastline, formed by the cities of Luís Correia, Cajueiro da Praia, Ilha Grande and Parnaíba, is only 66 kilometers long, but it has a unique wealth at its end. “We have one of the most beautiful landscapes on earth, it is the only open sea delta in the Americas. In it we can enjoy animals, fish, turtles, as well as bathing in the river and the sea”.

One of the most sought after destinations in the Parnaíba Delta, Ilha das Canárias, second largest in the Parnaíba River Delta, second only to Ilha Grande, is home to a fishing village with more than 2.500 inhabitants.

The island is an environmental preservation area, is part of the marine extractive reserve of the Delta and its population is distributed in four villages: Canárias, Passarinho, Torto and Caiçara. There are inns and restaurants and it is an ideal place for people interested in ecotourism. 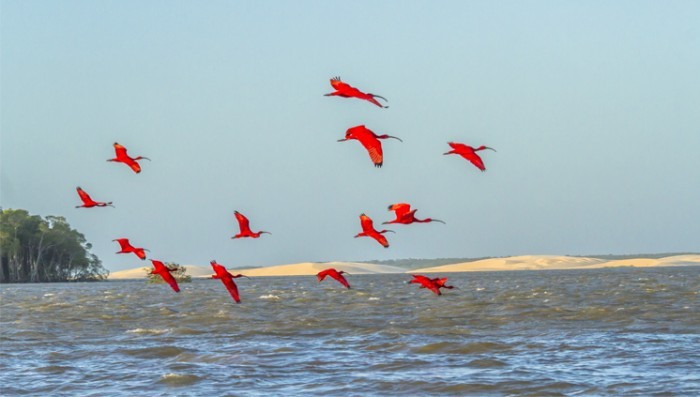 The Canary Island, on the border of Maranhão and Piauí in the environmental protection area in Maranhão. Ilha das Canárias in the municipality of Araioses in Maranhão is the second largest island in the Parnaíba River Delta, second only to Ilha Grande in Piauí. The Canary Island is home to […]

The Parnaíba Delta is in a corner between the coast of Piauí and Maranhão, the Parnaíba River meets the ocean and forms the only open sea delta in all of America. As it approaches the Atlantic, the Parnaíba opens up into five arms and gives rise to a set of […]