Canindé do São Francisco in Sergipe is the departure point for the tour boats that travel along the São Francisco canyon, in addition to the Xingó Hydroelectric Plant, the Xingó Archeology Museum and the angico grotto.

Discover caves with ancient paintings, walk the cangaço route, navigate through the canyons of the São Francisco River. The marks left by Canindé survive time and go beyond the city in the memory of those who pass by. With 2 km in length, following the bed of a temporary river, the trail leads to Vale dos Mestres. The three-thousand-year-old paintings are found in shelters at the foot of the cliffs.

Canindé do São Francisco also has another archaeological site, the Mundo Novo, and the Xingó Archeology Museum.
Canindé de São Francisco is located 203 km from Aracaju, on the banks of Velho Chico, on the border between Sergipe and Alagoas.

Navigating the river on schooners or catamarans is one of the main attractions of Canindé do São Francisco. On the way, islands, coves and caves, such as Talhado, a sanctuary of São Francisco.

The construction of the dam for the hydroelectric plant revealed the Xingó canyon. With 65 km in length and 170 meters in depth, it is suitable for canyoneering.

From the Dois Irmãs farm, the Cangaço route begins, up to Grota de Angico, where Lampião and Maria Bonita were killed in an ambush.

The creation of the Xingó Hydroelectric Power Plant in the 90s meant that a large part of the city had to move. Living among marks from different pasts, the people of Canindé reinvent their memory. 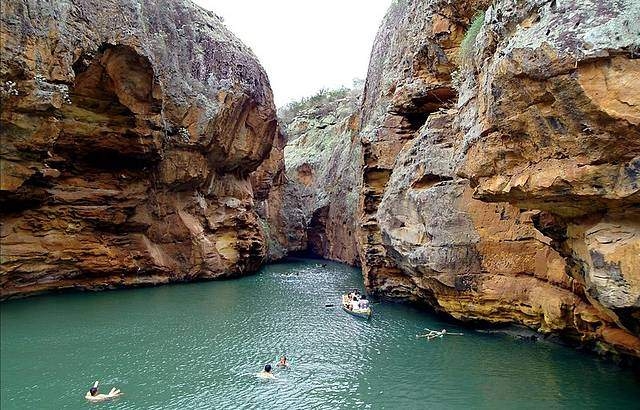 Canindé do São Francisco has the Xingó Dam, Archeological Museum and Grota do Angico

Canindé do São Francisco is located 198 kilometers from Aracaju, the city, which is on the border of Sergipe, Alagoas and Bahia, and the main departure base for tour boats that travel through the São Francisco canyon. The viewpoint of the Xingó Hydroelectric Power Plant and the Archaeological Museum, which […]