The Fort of Nossa Senhora de Monte Serrat, originally called Castelo de São Felipe, is considered an example of extraordinary importance of our primitive fortified architecture, as it is the most archaic model of local defenses that survived without major transformations.

In this particular, it is perhaps the oldest existing in all of Brazil.

Indeed, in Albernaz's cartography from the first quarter of the XNUMXth century, which also includes the Santo Alberto Fort, the old Santo Antônio da Barra Tower and the São Tiago de Água de Meninos Tower, the Serrat Fort is the fourth represented in plan.

The plan of Albernaz is the oldest iconographic document regarding the fort completed on October 18, 1742, and the restoration of Góis Calmon in 1927.

The plan of Albernaz is the oldest iconographic document about the fort.

In fact, from the point of view of the city's image, Forte de Nossa Senhora de Monte Serrat is a reference like many other forts, but quite special due to its privileged position and in extreme harmony with the morphology of the terrain.

Its round bastions were much like the Italian fortified architecture of the transition, though on an infinitely more modest scale. 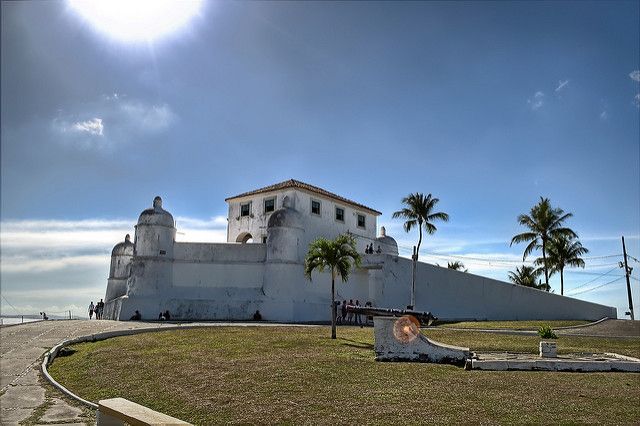 History of the Fort of Our Lady of Monserrate

For the less informed reader, it should be noted that the name of the fort has nothing to do with the Bastion of Monserrate.

This was part of the approximate defensive perimeter of Salvador, located, probably, on the hillside of the city, below the Fortress of Santo Antônio Além-do-Carmo, as described by Captain João Coutinho.

Assuming that it was built in the time of D. Francisco de Sousa, as Teodoro Sampaio and many others believed
illustrious researchers of our history, it is imagined that its design may well be the work of Baccio de Filicaia, who was in the service of that governor.

In his work on the military history of Brazil, written in the 1583th century, Colonel José Mirales considers it to be older, dating back to the time of Governor-General Manoel Teles Barreto (1587-XNUMX).

What is certain is that it was already part of the fortresses mentioned by Diogo de Campos Moreno in the 1609 report.

Although it had the capacity to receive a greater number of pieces, Monserrate did not have more than six or seven, since “they should not give a pygmy the same weapons as a giant […]”, as was the opinion of the Master-decamp. Miguel Pereira da Costa, expert on the subject.

Indeed, Caldas, who saw it as an “old and defective fortification”, found it in the mid-XNUMXth century with nine pieces, which is considered more than enough for its firepower.

He found it, too, with the two front turrets cut to the height of the barb, to increase the line of fire. These turrets, at some point in the past, were rebuilt.

Its “guardhouses”, as the common people tend to consider, are actually tiny turrets, whose function was to flank the curtains with a musket shot (a type of portable firearm).

Because it had a barbette parapet, this fortress was always frowned upon by artillerymen, as they were more exposed to enemy fire.

All these artifices, however, aimed to increase the fort's fire capacity, making it receive a greater number of pieces and clearing the visibility of the frontal shot.

It had, among others, a defect peculiar to many Salvador's fortifications, which was the existence of a stepfather, formed by the hill where the headquarters of the Coordination of Environmental Resources is currently located, at a higher altitude than the stronghold of Monserrate.

Unlike other defenses of our city, which never fought against an external enemy, the old Fort or Castle of São Felipe, today Forte de Nossa Senhora de Monserrate, was involved in some skirmishes throughout its four-hundred-year existence.

The behavior of its defenders is, however, a matter of controversy.

During the first Dutch invasion, it was taken by the Batavians, after having exchanged fire with some ships from the enemy fleet.

Their resistance to the assault seems not to have been tenacious because, once the city was occupied, there was no alternative but to withdraw.

Furthermore, it was not difficult to disembark on the beaches of the Itapagipe peninsula and cut off communication with the city's garrison.

There is a new divergence among historians about what happened in the Fortim de Monserrate with the arrival of D. Fradique de Tolledo, in 1625.

Some want that, in view of the mighty fleet, the Dutch withdrew from the city, abandoning it, a prudent and salutary measure.

Aldenburgk says that his garrison still fired on the ships of the Portuguese-Spanish fleet, withdrawing the following night.

Those who wanted to value Portuguese achievements, such as the military Francisco de Brito Freire, author of História da Guerra Brasílica, speak of the taking of the fort by surprise. Where bravado abounds, historical truth dies.

Thirteen years had elapsed since the Portuguese reoccupation of the fort, when, over it, “on the afternoon of the 21st of April, Major van den Brand advanced with some people along the beach, leading five pieces, and took it from Captain Pedro Aires de Aguirre, who it had few soldiers, and six cannons.”

It was the invasion of nassau of 1638. The Dutch only vacated it when they returned to Pernambuco.

In particular, it could be said that Aguirre had been cabo of the keep since 1618 and, certainly, an old man.

The Fort of Nossa Senhora de Monte Serrat would go into hibernation for about two hundred years, waking up sporadically from its nap with a commemorative salute when it was occupied by the Sabinada rebels in 1837.

It was “his third warrior adventure”.

The seditious, who took it with the help of the liner Brasília, exchanged fire with ships of the Imperial Armada, but surrendered to the more modern artillery of the corvette Regeneração and the brig Três de Maio, which disembarked the garrisons supported by a loyalist detachment that advanced across the land.

In the Second Reign, the Christie issue, which involved incidents with ships and resulted in the diplomatic break with England, raised the problem of the fort's renovation. This was carried out in 1863, in accordance with the recommendations of Colonel Beaurepaire Rohan, who was then collaborating with the security of the country.

From then on, no substantial intervention for its conservation is known until, in a deplorable state, it was the object of restoration work under the government of Góis Calmon (1924 to 1928), as part of the project to “beautify” the areas of Monserrate.

At that moment, a commission was created, which included the Captain Cunha Menezes, the professor Alberto de Assis and the engineer Américo Furtado de Simas.

The most recent restorations, undertaken by the Brazilian Army, were minor, not altering the appearance of the defense.

Fort of Our Lady of Monte Serrat