Fort of Santo Antônio da Barra and Farol da Barra in Salvador is certainly one of the ex-libris of the City of Salvador.

However, none of the other fortifications in Cabeça do Brasil has undergone so many metamorphoses during its more than four hundred years of existence than the Fort of Santo Antônio da Barra.

Although historians usually do not state its origins exactly, a very old news about the first construction of this defense is found in a Codex of the Overseas Archives.

He transcribes a charter dated May 21, 1598, by which he was named “bastion” of Brito Correia, commander of the Santo Antônio Fort, “which began at the bar of that City.”

This must be the version that followed the polygonal rammed earth tower, according to the Livro Velho do Tombo do Tombo. monastery of St. benedict.

Thus, the statement by historian João da Silva Campos that the first fort, that is, the octagonal tower, was the work of the government of Manoel Teles Barreto (1583-1587) is acceptable.

As with the fortifications of that block, it is possible that Santo Antônio da Barra was born in the form of a tower, according to representations by Albernaz. 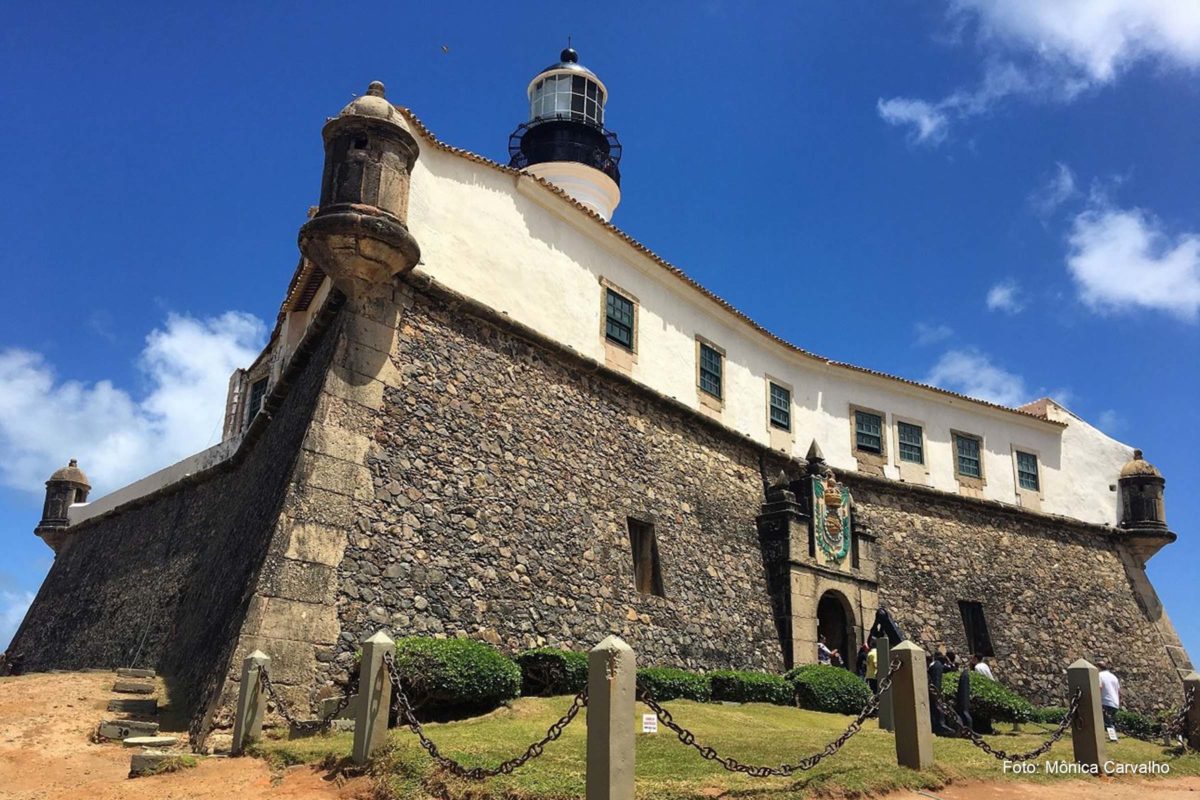 History of the Santo Antônio da Barra Fort in Salvador

These figurations should not be random or fanciful, because there is a graphic scale in the drawings. Furthermore, the other three fortifications represented – the Reduto de Santo Alberto, the fort of monserrat and the Torre de São Tiago de Água de Meninos – can be confirmed by the analysis of other iconographies or, in the case of Monserrate, because it still exists.

By the graphic scale offered, we can assess the dimension of the axes of the regular octagon represented as about 120 palms (approximately 26 meters).

Like the old stronghold of Santo Alberto, the Torre de Água de Meninos and the Castelo de São Felipe, today Nossa Senhora de Monserrate, it had a high entrance, with stairs and drawbridge, suggesting a typological solution of the time.

As an octagonal tower, the primitive construction of Forte de Santo Antônio, seen from afar, could be interpreted as if it were a cylindrical tower.

The problem is that, in this specific case, the forms used as decoration of cartography may not be contemporary with the cartographic plan or its author, Albernaz, corresponding to older situations of the fortresses, copied from other prints.

The distrust is justified by information contained in Diogo Moreno's report – not only the iconography, dated 1609, but also the following reference in the description of the Monserrate Fort: “stone and lime fort from the same design as S. Antônio […] ”.

As can be seen, in Moreno's drawing there is not an octagon, but a hexagon, which really resembles the Fort of Monserrate without the towers.

The entrance remains high and with a drawbridge, but the protection towers for access to the inner perimeter are located on the outside of the curtain. The parapets have gunboats, although few.

Judging by the artillery listed in Diogo Moreno’s Livro que da reason do Estado do Brasil, with four pieces in total, this second version, even though built in a more durable way, in stone and lime, should also be of modest proportions.

According to a report by Military Engineer José Antônio Caldas, the perimeter of curtains of the late XNUMXth century version had, in the mid XNUMXth century, sixteen pieces of different calibers, compatible with its expanded line of fire.

Some historians, in their inferences, want to attribute some strategic value to this sympathetic and photogenic force, but one cannot be infected by the excitement, given the coldness of the facts and the reality of the situation.

Since the beginning of the XNUMXth century, Moreno said, in relation to him, that in that part “ships armed with corsairs enter and leave every day without the artillery that is here harming them, and even though they have colubrinas [type of artillery piece] of sixty yards, will never be able to fully defend the bar”.

Later on, he considers it as an “adornment of the bar”, and in this we all agree.

The reality is that no specialist considered the Fortress of Santo Antônio da Barra to be of great strategic or tactical value.

Diogo Moreno is more than clear when he states: “His Majesty has often been warned that the Forts of Santo Antônio, Itapagipe and Água de Meninos […] are of no effect, so they do not defend anything, as for the great risk with which they support themselves by their weakness and bad design […]”.

Bernardo Vieira Ravasco, Secretary of State and War, also said, in his report of September 11, 1660: “These three forts, for being almost together, and not being of any use to those who assist them […]”.

Even after substantial renovations at the end of the XNUMXth century, which greatly increased the fire capacity of Forte de Santo Antônio da Barra, its prestige did not grow.

Master-of-field Miguel Pereira da Costa, at the beginning of the XNUMXth century, was also very emphatic in his opinion about the inefficiency of the fort.

It should be noted that, despite already presenting the current form, much more developed, the fortification did not deserve credit, having as a disadvantage a stepfather, the current hill of Gavazza.

The opinion about the limitation of Santo Antônio da Barra is shared even by lay people, such as Frei Vicente do Salvador, who claims that this fort and that of São Felipe (Monserrate) are “more for terror than for effect”.

The improvements of the new project did not solve the problem of the strategic efficiency of the fortress, because they did not help to stop the invasions of the city from the south.

A defense continued without the ability to antagonize the enemies that entered the bay. From a tactical point of view, although the fire perimeter had been increased, the conditions for the defense of its curtains were precarious.

The Batavians took this battleground in the invasion of 1624, so as not to leave enemy troops behind when they landed in Porto da Barra, but they did not invest in a large garrison to maintain it. This is a fact, because soon after the fort was retaken by Francisco Nunes Marinho, at the behest of Matias de Albuquerque.

As a matter of fact, it was common opinion among scholars in the defense of the capital that it would be reckless to divide up the dwindling troops to garrison the remote corners of Barra and Monserrate.

However, we cannot ignore the role played by the fort as a lookout at the bar of Baía de Todos os Santos, a function for which it had a privileged position.

From this position, since the early days of Ponta do Padrão, vessels that came from the north in search of its waters were marked.

There are several documents talking about the signs with fires, which ran along the entire coast, from Casa da Torre de Tatuapara to Ponta do Padrão, warning of the approach of ships, and the shots that were made from fortress to fortress indicating more than four ships. to enter through the bar.

This function earned our fortress the nickname of Vigia da Barra.

The lighthouse installed in the Fort of Santo Antônio da Barra, still in the XNUMXth century, for the defense of navigators against the reefs and shoals of that area of ​​the sea, demonstrates that, more than its bellicose function, always questioned, it could boast those of navigation safety and surveillance.

The installation of the lighthouse in the Fort of Santo Antônio da Barra took place in 1698, due to the disaster with the Galeão Sacramento, a vessel that carried General Francisco Correia da Silva, who would become governor, but died in the shipwreck.

Veja Shipwreck of the Galeão Sacramento in Salvador BA

For the exercise of these functions, a lighthouse tower with a square base was installed, which survived for a long time.

According to Silva Campos, the cylindrical tower must be the result of a reform originated by the Imperial Order of July 6, 1832, when lighting equipment purchased in England was installed.

New European equipment would be installed in 1890 and renovated in 1904. The electrification of the system dates from 1937.