Forró has its origins in popular dances that were held at the end of the XNUMXth century and were called “forrobodó”, “forrobodança” or “forrobodão”.

At that time, it was necessary to wet the floor of the place where these parties took place, as they were made of “hard floors”, that is, there was no coating, only earth.

People used to dance with shuffles in order to prevent the dust from rising, hence the term rastapé or shuffle.

Similarities were also found between this style of dance and the toré – an indigenous celebration where, at a given ritualistic moment, individuals drag their feet on the floor.

There is also a certain influence of Dutch and Portuguese rhythms, in addition to European ballroom dancing.

Videos on "History, origin and evolution of forró" 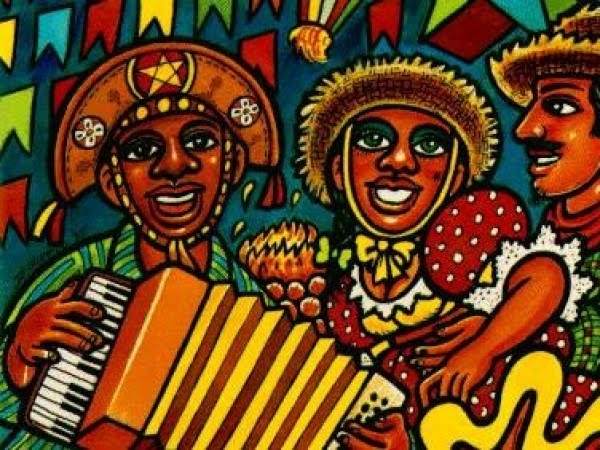 The word FORRÓ, how it came about - origin of expressions08:53

Origin of the name forró has some hypotheses:

The. historian and folklorist Câmara Cascudo

Historian and folklorist Câmara Cascudo suggests that the most likely term is a derivation of the term “forrobodó”.

This term, in turn, is a Galician-Portuguese variant of the old word forbodó, which originated from the French word faux-bourdon, which can mean “disentangling”.

B. Another assumption - no historical evidence

Is that such name would have been created from an English expression.

According to this theory, British engineers who settled in the Pernambuco region during the installation of the Great Western Railroad used to hold parties for distinguished figures.

However, at certain times, such events were open to the public and their invitations included the term for all, which means “for all” in Portuguese. The local people then began to pronounce “forró”.

Well, a year before, singer and composer Luiz Gonzaga recorded the song “Forró de Mané Vito”, produced together with Zé Dantas. In 1958, another song by the musician called “Forró no Escuro” was also very successful.

Despite the popularity achieved with the successes of this music icon, what really spread the style throughout Brazil was the migration from the Northeast to other states in the country, especially in the 1960s and 1970s.

Currently, forró is appreciated throughout Brazil and celebrated on December 13, the birth date of accordion player Luiz Gonzaga.

Forró as a musical genre

This musical style is popularly associated with other genres: o xote, the xaxado and the baião. In them, the instrumental base used is the accordion, the triangle and the bass drum.

It is also called traditional forró or forró pé-de-serra and its main representatives are Luiz Gonzada, Jackson do Pandeiro, Dominguinhos and Sivuca.

From the 80s onwards, the forró underwent some changes. At that time, drums, guitar and electric bass were also introduced.

In the 1990s, other elements were incorporated by some bands, such as the keyboard and the sax, and the bass drum was removed.

This subgenre came to be called electronic or stylized forró and was criticized for transforming traditional forró into a superficial product of the cultural industry.

In the 2000s, this type of music received a new facelift and appeared in the form of the university forró, which added some instrumental changes to the original style.

Forró as a dance

O forró is danced in pairs in a closed hug position, with partners facing each other, using full or partial body contact.

Depending on the style of music played – baião, xote, xaxado, university forró or electronica – the way of dancing is also altered.

The main destinations for those who enjoy dancing forró are: Itaúnas (ES), Caruaru (PE) and Campina Grande (PB).

Style has gone through three major phases since it emerged in the 1940s.

This week begins the main moment of the forró marathon at the São João festival in the Northeast.

With the approach of the official night of celebration of the saint, next Friday (24), it is almost impossible to hear any kind of different music at this time in cities that become the main focus of the festival, such as Campina Grande (PB) and Caruaru (FOOT).

But saying that everyone plays forró doesn't necessarily mean that the music is the same.

Over the seven decades since it emerged and spread through the hands of Luiz Gonzaga, the musical style that is a symbol of the Northeast has undergone transformations in its form.

Luiz Gonzaga is no longer a purely regional music played with accordion, bass drum and triangle, it has adapted to modernity, incorporating elements of pop, axé and tecnobrega.

Younger forró bands have a production comparable to the great pop concerts in the world.

One of these groups, Calcinha Preta, even performed in 360 degrees, like those of U2.

The transformation of forró generates controversies and disputes.

In the same tone, Dominguinhos, faithful to the original forró, has already claimed that the new bands have changed their style so much that “you can't say that that's forró”.

Despite the evolution of forró and the contrasts, the different styles of forró can "coexist", according to Expedito Leandro Silva, author of "Forró no Asfalto: market and cultural identity", which deals with the evolution and urbanization of the musical style that is a hallmark of São João in the Northeast. “The first does not cease to exist, and the second continues to modernize and accentuates its differences from the original”.

They are marked by urbanization, technical improvement and adaptation of the style to the market at different times.

As soon as it appeared, forró was an authentic artistic creation of the rural universe of the sertanejo, and had in Luis Gonzaga its main promoter and representative.

The music was usually played with only three instruments and the lyrics brought nostalgia, regional themes and a strong country accent.

Pé-de-serra forró is still present in its classic form at the great party in the Northeast.

Be it through the hands of artists already recognized nationally, such as Dominguinhos, or by more local names such as Santana, there are still those who keep the original style alive.

The first big changes came from 1975, when popular musicians of the time, such as Alceu Valença, Zé and Elba Ramalho and Geraldo Azevedo turned to forró, adapting the style to the time and form they were already playing. It was the University forró, which had its name taken from the young and urban audience to which they appealed.

The style was revived in a similar style two decades later, when groups like Falamansa and Trio Rastapé became popular nationally with the “forró foot-de-serra adapted to the current world”, as explained Ricardo Cruz, from Falamansa.

"The similarity between us and Alcaeus Valença and Zé Ramalho exists because we followed the same movement of looking for original, traditional sources, such as Luiz Gonzaga and Jackson do Pandeiro, allying to the moment in which we live.

In my case, it's contemporaneity, mixing the “pé-de-serra” with influences from reggae, rock and MPB. We seek to make foot-of-the-saw together with our daily life, our reality”, he said.

Despite the continuity of the traditional forró and the accent change without major transformation of the university student, in the 1990s the style underwent its greatest transformation.

That was when forró incorporated new instruments, dancers, more colorful clothing and elements of country, romantic, cheesy and even axé music to create electronic forró.

Also called stylized forró or even “oxente music”, the movement began at the beginning of the decade, with groups like Mastruz com Leite and Magníficos, and has become bigger and more transformative over the years.

The change in recent decades has been so intense, reaching groups such as Aviões do Forró and Calcinha Preta, which, according to researcher Expedito Silva, have so changed the original proposal that they are closer to tecnobrega than to forró itself.

The founder of the band Magníficos, one of the first of the stylized forró, explained that what they do is popular romantic music mixed with forró. “It's as if we took a song by Roberto Carlos, for example, and played it in a forró rhythm”, said José Inácio, known as Jotinha.

The band Magníficos, actually, started with traditional music, pé-de-serra, but decided to change. “Luiz Gonzaga influenced us a lot, but we adapted the traditional mountain range to the romantic. We like and respect, but that's not what we want to do. You have to follow the evolution of things”, he said.

According to Silva, who studied the evolution of forró, the main difference between the classic and electronic style is that new bands deal better with the market, sell more. “The style is preferred by younger people, who identify more.

What happens is that those who like forró, especially in the Northeast, don't confuse electronic with traditional. He sees the stylized as leisure, entertainment, pastime, but he respects the traditional forró”, he said.

History, origin and evolution of forró in the northeast

Tour and travel guide for Bahia and Northeast