Rei Momo, Pierrô, Arlequim and Columbina are the most well-known and traditional characters of Carnival and are present at parties and marches.

The multicolored costumes of these figures gave rise to the costumes used in the dances of carnival and are some of the ingredients of the joy of this popular festival.

Rei Momo is the figure of a fat man, smiling and charismatic, symbol of Brazilian carnival. There are several myths about how he arrived in Brazil and became an important character in Brazilian folklore during the carnival season.

Son of Sleep and Night, he was occupied only with examining the actions of gods and men, and even reprimanded them. Regarded as the god of Grace, he had a very jocular character.

He was represented with a mask in one hand and in the other a ridiculous figure to imply that he takes the mask off the vices of men and laughs at their madness. He was elected judge of the works of Neptune, Vulcan and Minerva: none of them was perfect.

He reproached Neptune because, building a bull, he didn't put braces on it. 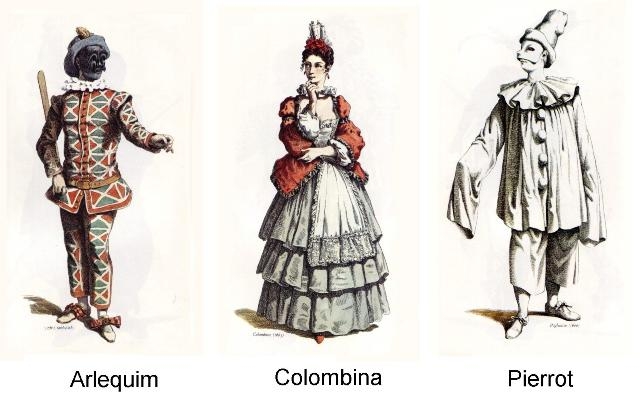 He criticized the man forged by Vulcan for not having made a window in his heart to see his secret thoughts. He blamed the house that Minerva had built, because she couldn't move it from one place to another. According to Greco-Roman Mythology.

Actor who acted in the popular farces of the old theater. Originating from the fools in charge of entertaining the Portuguese masters and gentlemen who inhabited the royal palaces and noble residences with mimes and popular farces.

Character of the old Italian comedy commedia dell'arte in a multicolored costume, generally made of lozenges, whose function was to amuse the audience, at intervals, with jokes and snorts, was later incorporated as one of the characters in the comedies' adventures, becoming one of its most important characters.

Main female character of commedia dell'arte, lover of the Harlequin and companion of Pierrot. Flirty, happy, futile, beautiful, smart, seductive and fickle. She was dressed in white silk or satin, had a short skirt, and wore a cap.

Character also from dell'arte comedy, naive and sentimental. He wore very roomy trousers and coat, decorated with pompoms and with a large ruffled collar.

Who are Pierrot, Harlequin and Columbine?

Discover the origins of three of the main characters of Carnival – who appeared for the first time in a satire of customs very popular in Italy.

They are characters of a theatrical style known as Commedia dell'Arte, born in 16th century Italy.

Part of a plot full of social satire, the three roles represent servants involved in a love triangle: Pierrot loves Columbine, who loves Harlequin, who, in turn, also desires Columbine.

The style emerged as an alternative to the so-called Erudite Comedy, of literary inspiration, which featured actors speaking in Latin, at that time a language already inaccessible to most people.

Thus, the story of the trio in love has always been an authentic popular entertainment, with an origin influenced by Carnival games.

Presented in the streets and squares of Italian cities, the staged stories mocked the life and customs of the powerful at the time. For this, many other characters entered the scene, in addition to the three most famous.

On the side of the bosses, for example, there was an extremely avaricious merchant (called pantaleon), a pompous intellectual (the Doctor) and a cowardly officer, but a bully (the Captain).

Other typical characters were the couple Isabella and Oracio (generally, children of employers) and other servants.

Despite obeying a predefined plot, the plays had improvisation as the main ingredient, demanding great discipline and comic talent from the actors, who had to respond quickly to new jokes and situations created by their colleagues.

“Until today, the Commedia dell'Arte it is a very rich method for the actor's learning and training”, says actress Tiche Vianna, graduated from the School of Dramatic Art of the University of São Paulo (USP), with a specialization in Commedia dell'Arte from the University of Bologna and Florence, Italy. An interesting detail is that there was always, in the middle of the show, an interval called lazzo, which could have more comedy, stunts or political satire without any relation to the plot.

Finished the lazzo, the story continued where it left off. With this unique style, the Commedia dell'Arte influenced dramatic art across Europe.

Pierro
Its original name was Pedrolino, but it was baptized, in France in the 19th century, as

Pierrot and thus won the world. The poorest of the servant characters, he wore clothes made from sacks of flour, his face was painted white and he wore no mask.

He lived suffering and sighing with love for Columbine. That's why she was the favorite victim of on-screen jokes. It was no wonder that her attitude, her dress and her makeup influenced all circus clowns.

pantaleon
The best known of the patron characters, who represented the elite of Italian society in the stories of Commedia dell'Arte, Pantaleon (also called “The Old Man”) was a “merchant of Venice” (an expression that gave the title to a play by Shakespeare). A miserly tyrant and clumsy philanderer, he was a constant target for the taunts of servants and other characters in the plot.

Also a servant of Pantaleon, Harlequin was a lazy and insolent smart-ass, who tried to convince everyone of his naivety and stupidity. After jumping onto the stage, he would move around the stage with dance steps and a large repertoire of acrobatic moves.

Debauched, he loved to play pranks on other characters and then used his agility to escape the confusion created. Another of his trademarks was the lozenge outfit.

Raised by a daughter of the boss Pantaleão, but as beautiful and refined as her mistress, Colombina was also the pivot of a love triangle that would become famous throughout the world – on the one hand, the passionate Pierrot; on the other, the trickster Harlequin. To awaken the love of the latter, the romantic servant sang and danced gracefully in the shows.

Veja History and Chronology of the Carnival of Salvador da Bahia