O Lacerda's elevator is one of the icons of brazilian architecture. The construction is a means of public transport that joins two parts of the historic center of Salvador: the Upper City and the Lower City. At 63 meters tall, it connects the two points in a quick 20-second journey.

This postcard of the capital of Bahia was created to solve a big problem at a time when the city was being built and developing economically.

Salvador is divided by a large escarpment, a geological accident that creates a gap of almost 60 meters in the terrain, so transporting goods or even walking from the Uptown for the Lower City was a real challenge.

In the XNUMXth century, the solutions found to this problem were cranes and other transport systems, but always with a focus on the transit of goods.

For people who wanted to move between Cidade Alta and Cidade Baixa, the options were long staircases, poorly paved slopes and, in the XNUMXth century, animal-drawn trams. 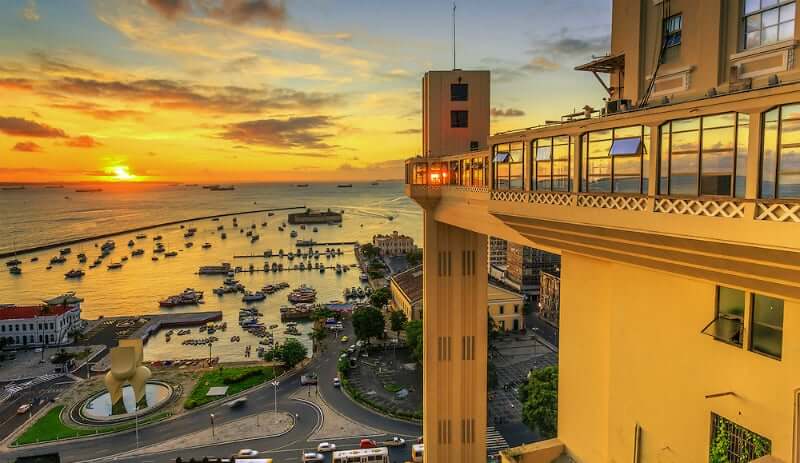 The construction of the Lacerda Elevator

Until, at the end of the 1860s, Antônio de Lacerda, from Bahia, took over the project that we now know as Elevador Lacerda.

The construction was a family venture. Entrepreneur Antônio de Lacerda, who at the time was in charge of the Urban Transport Company, conceived the project and carried it out with the help of his younger brother, engineer Augusto Frederico de Lacerda. Their father, Antônio Francisco de Lacerda, financed the construction.

The hydraulic elevator, which took four years to build, operated by means of a steam engine and had only one tower with two cabins.

For the construction of the tower, it was necessary to open a vertical tunnel, so the tower penetrated a living rock, on which is the Upper City. In addition, another tunnel was opened horizontally to allow users access to the elevator.

Inauguration of the Lacerda Elevator

The Conceição da Praia Hydraulic Elevator, as it was called at the time, was inaugurated in 1873, becoming the main means of transport between Cidade Alta and Cidade Baixa. It was nicknamed “Screw” because of the large spiral part that propelled the two elevator cabins.

In this first structure, to ensure that the maximum safety limit was respected, the people to be transported were individually weighed and their weights were added later. About 20 people could be transported at a time.

The construction was a landmark of innovation at the time. In 1896, it was renamed Elevador Antônio de Lacerda, in honor of its founder, as recommended by the Instituto Geográfico e Histórico da Bahia.

Despite all the innovation, Elevador Lacerda received criticism at the time, especially from foreigners. They pointed out that the work used little iron, a symbol of the development of engineering and architecture of that time.

The predominant style in the architecture of the Elevador Lacerda is neoclassical, with full-arch openings marking the access to the equipment in the Upper Town, where the upper end of the tower was connected to Praça do Palácio by a metal walkway.

Renovations in the Lacerda Elevator

The elevator underwent a series of renovations until it reached the current model. In 1906, it received the first reform to have its base enlarged and to be powered by electricity.

In 1930, the elevator gained a second tower, two more cabins and a steel and concrete walkway that connects all the structures. In addition, the architectural ensemble gained elements of the Art Deco style, such as pilasters and thin spans in the towers.

In this renovation, which is the most remarkable of the project, Elevador Lacerda reached 72 meters in height and now has a span of 71 meters in the walkway.

In addition, the Elevator now has a greater transport capacity: from 32 to 128 people in a single trip. The interior has also been modernized with granite-clad floors and walls and electronic turnstiles.