Luís Correia is a municipality in northeastern Brazil, located in the north of the state of Piauí.

It is one of the four coastal municipalities of Piauí, and also one of the most visited by tourists and bathers throughout the year.

On weekends, many residents of Teresina they fall on the road towards Luís Correia, which is home to the best stretch of the coast of Piauí.

Some local spas, such as Coconut Tree and Watchtower, have stalls that get crowded. others, like carnaubinhas, are still preserved and charming.

The city of Luís Correia has the longest stretch of coastline in Piauí – there are 46 kilometers, more than half of the coastal area of ​​the state.

The small coastline and, therefore, little explored, makes Piauí a sure destination for those looking for quiet beaches.

The largest number of beaches in Piauí are in Luis Correia, which also has 4 beautiful lagoons and a cluster of dunes that can be explored, the Piauí sheets, which is also part of the Route of Emotions.

The city's highlight is also its sea port, the only one in Piauí, and its seafood-based cuisine.

Still on the coast is the joyful Atalaia Beach, considered the party spot for tourists. This one has more urban characteristics, modern architecture, but with restaurants and bars with natural aspects such as wood and carnauba straw.

Whoever seeks rest soon identifies with the Peito de Moça Beach, a curious name for its formation of dunes in the sea resembling a pair of girl's breasts, and the Arrombado Beach, named for its strong waves that hit its sloping sand.

Here, bars are rustic and the show is on account of nature with the right to shade and fresh water!

my favorite is Macapá Beach, but I want you to go there and find out why.

Close to Luís Correia, in beach cashew tree, combed tree It is one of the famous tourist spots in the region.

A tamarind tree that grew slanted because of the strong coastal winds that seem to have also lovingly combed its crown. The beautiful tree defies creativity and, as it was so visited, it gained a square around it.

Also worth a visit to Barra Grande, one of the jewels of Piauí.

Things to do in Luis Correia

Luís Correia has beautiful beaches and incredible places to relax or practice sailing sports. It is possible to spend a few days there without getting sick or wanting to continue the journey.

With tour options for all ages, Luís Correia brings together historical and cultural attractions, outdoor leisure areas and attractions to relax, entertain and have fun. Below are some of the main attractions of things to do in Luís Correia and surroundings.

The coast of Piauí is 66 km long and has 15 beaches in total. The time needed to get to know all the beaches depends a lot on your travel pace and your objective. 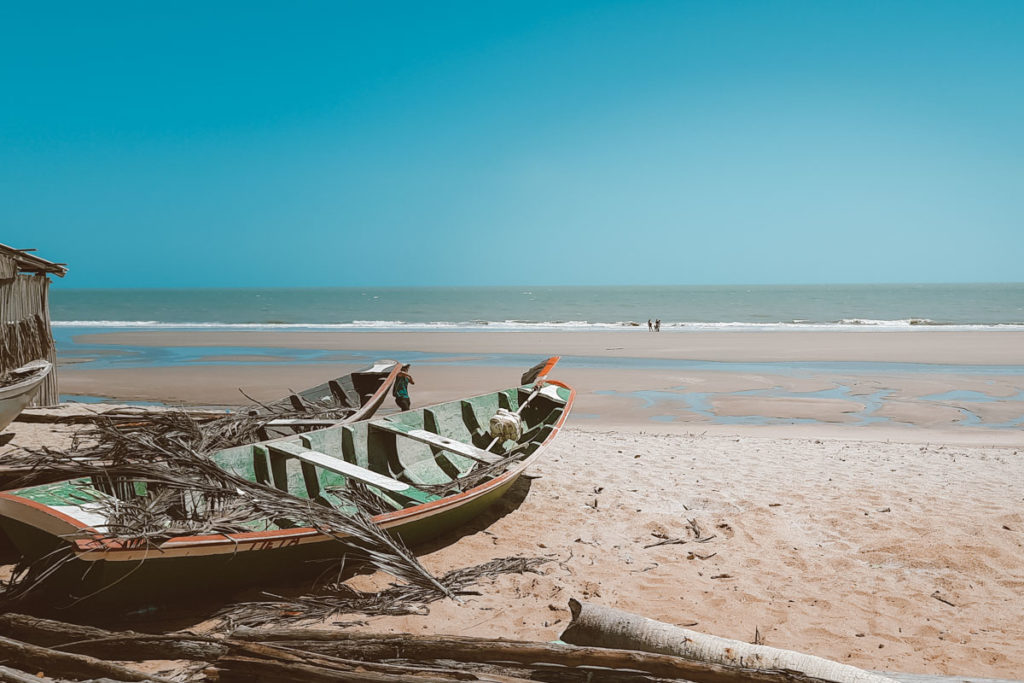 If you have little time in Piauí, you can see all the beaches in two days by car. The beaches are close, the roads are well signposted and it's easy to get from one end to the other.

Macapá beach in Luís Correia is still little known by the general public. It is very close to another beautiful landscape, Barra Grande, what separates the two beaches is the Camurupim river, being possible to access the beach of Barra Grande by boat.

The beach is very popular with kitesurfers, as the sea and wind conditions are ideal for the sport. For those looking for tranquility and good food, Macapá beach is undoubtedly the best option in Luís Correia.

At low tide the sandbars look like dunes connected by the water. A bucolic landscape, where it is also possible to practice sport fishing.

The beach is a constantly changing paradise and may not exist in a few years due to strong winds blowing towards the mainland.

It was a fishing village, located on the banks of the Camurupim River, which in recent years has been suffering a lot from the rise in sea levels, which increasingly invades the village, leaving traces of destruction and forcing its residents to always be on guard. constant adaptation.

Atalaia beach is one of the most sought after beaches on the coast, being the busiest during the vacation period, it stands out for the large number of tourists. It is a quiet beach and has many bars, restaurants and hotels and inns.

The beautiful Praia Peito de Moça gets its name due to the formation of its dunes, which look like the breasts of a young woman. The white sand beach and blue sea is between Praia do Coqueiro and Atalaia in Luís Correia, Piauí, attracts tourists throughout the year!

Due to its firm sands and beautiful landscapes, with blue sea, sun and green, tourists enjoy walking along the beach to visit the neighboring beaches.

An invigorating and healthy experience for those who want to enjoy the tranquility of Praia Peito de Moça and see the busiest beaches in its surroundings!

The beach is usually quiet, ideal for taking family, friends and for those who want to rest on their vacation, that is, to escape the noise, rush and pollution of big cities. It is possible to see people relax and renew their strength.

The waves break gently, perfect for those who want a calm and relaxing sea bath! It is a great beach to take the family and especially the children.

The name of Praia do Arrombado originates from the waves that crash hard on the sloping sand strip, close to the modest shacks.

Arrombado beach is very extensive with a calm sea and white sand, in addition to forming beautiful natural pools. With an exuberant landscape, it is excellent for those who want tranquility.

Praia do Coqueiro has an old fishing village and infrastructure with restaurants, bars and hotels.

Considered one of the most beautiful beaches in Piauí, Coqueiro beach is the point of the kitesurf crowd, as it has constant winds and waves in high season for the practice of the sport, between August and September.

The beach has an excellent infrastructure, with many kiosks, bars and restaurants, being one of the most frequented on the coast.

In its extensive coral reef, which at low tide forms natural pools of crystal clear water, is the quietest part of the beach. Its bustling part is frequented by kitesurfers and is home to sport championships.

Praia do Coqueiro has crystal clear sand dunes and countless coconut trees frame the landscape, dominated by a sea of ​​calm and clear waters.

Despite its proximity to the city, Coqueiro beach still retains the rustic traces of fishermen's canoes anchored by the sea.

Os Maranhenses Sheets you already know, but did you know that Piauí also has its Lençóis. A quad bike ride through the dunes of Lagoa do Portinho will leave you with a taste of what it's like to be in the sheets.

Kitesurf and winfsurf can be practiced all year round in Piauí. wind practically throughout the year, with great variations.

The strong wind season on the coast is long: the first days with winds above 20 knots start in July and intensify until January.

The months of September to November are usually the months with the strongest winds, reaching above 35 knots in the late afternoon. You can usually see small kites at this time, between 5 and 9 m2.

Perhaps the main destination for those who decide to visit Piauí, the Delta of the Parnaíba it's really amazing!

The Parnaíba River cuts through 20 municipalities in Piauí and flows into the Atlantic Ocean, forming the third largest delta in the world (after the Nile River in Egypt and the Mekong River, which crosses 6 countries in Southeast Asia).

Barra Grande beach is an unusual blue. Perfect for windsurfing due to the strong winds, the beach has a white sand and quite extensive.

Nearby is the combed tree, a tamarind tree bent by the wind. You can get an idea of ​​the intensity of the winds in the region just by the tree. Even so, Barra Grande is a great choice for those looking for a paradise beach to relax by the sea.