Although June festivities are celebrated in the four corners of Brazil, in the Northeast region the festivities gain a great expression.

The month of June is the time to pay homage to the three Catholic saints: São João, São Pedro and Santo Antônio.

As the northeast is a region where drought is a serious problem, northeasters take advantage of the festivities to thank the rare rains in the region, which serve to maintain agriculture.

In addition to cheering the people of the region, the festivities represent an important economic moment, as many tourists visit northeastern cities to accompany the festivities.

During June festivals, hotels, businesses and clubs increase profits and generate jobs in these cities.

Videos about the June Festivals in the Northeast June Party in Caruaru in Pernambuco June Festivals in the Northeast June Festivals in the Northeast - Traditions and Attractions

Although the majority of visitors are Brazilians, it is increasingly common to find European, Asian and North American tourists who come to Brazil to follow these festivals closely.

As the month of June is the corn harvest season, most of the sweets, cakes and snacks related to the festivities are made from this food. Tamale, cural, boiled corn, hominy, couscous, popcorn, corn cake are just a few examples.

Traditions are part of the celebrations. The month of June is marked by bonfires, which serve as a center for the famous square dance.

Balloons are also part of this scenario, although increasingly rare due to the laws that prohibit this practice, due to the fire risks they pose.

In the Northeast, the formation of party groups is still very common.

These groups are walking and singing in the streets of the cities. They go past the houses, where the residents leave a large quantity of food and drinks in the windows and doors to be enjoyed by the party-goers.

In the Southeast region, festivals are traditionally held. These popular festivals are held by churches, schools, unions and companies. They have stalls with typical foods and games to entertain visitors. The square dance usually takes place during the entire fete.

The northeast of the country is the main producer of the traditional June festivals. 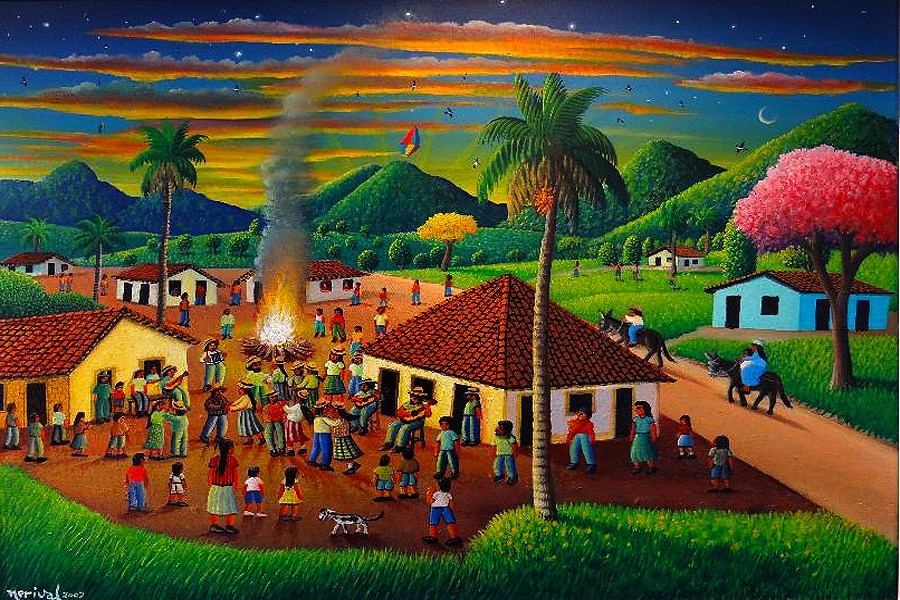 The months of June and July are known for bringing the cold and the long-awaited and traditional June festivals.

All over the country, the celebrations in honor of São João, Santo Antônio and São Pedro are a great opportunity to eat popcorn, drink hot water and have fun with quadrilles and popular dances.

The June party is considered the second most important in Brazil, second only to Carnival.

The northeast region is the one that takes tradition more seriously and, therefore, holds most of the great June festivals that take place around the country.

Main June Festivals in the Northeast

In Caruaru, the animation is intense. There are nearly 500 concerts happening in six poles across the city, square dances with up to 4 people, forró music, a giant food festival and parades that fill the Luiz Gonzaga Events Patio.

The city of Caruaru will be decorated with more than 50 thousand meters of flags, 60 themed dolls and hundreds of balloons.

June festivals in the municipality of Pernambuco are famous for the striking multicolored decoration of the huts and the rhythm of the forró pé de serra.

The gangs move hundreds of people and performances by renowned artists such as Zé Ramalho and Dominguinhos are already registered trademarks in the municipality.

At this time of year, hundreds of tourists travel to the Northeast to celebrate São João in Caruaru.

The success of the party has already become a tradition. Every year, São João de Caruaru attracts an audience of approximately 1,5 million people.

Bonfires, fireworks and the rhythm of the baião are the hallmarks of the June festivals in the capital of Sergipe.

The famous Arraiá do Povo spreads through the streets and invades inns and restaurants. The festivities spread across the state, making Sergipe one of the best destinations to celebrate São João.

In June, Aracaju becomes one of the main festive centers in the Northeast, attracting approximately 1 million people.

Forró Caju makes São João de Aracaju a unique party with attractions from different styles of forró, in addition to the presence of national and international artists.

The sound of the accordion, the zabumba and the triangle takes over two spaces: in the Centre, between the public markets, there is Forró Caju, where regional artists and big names in Brazilian music enliven the public; and on the edge of Atalaia, the Arraial do Povo is realized, with a scenic city that imitates a small village in the interior.

São João da Bahia is full of news and for 2015, the event promises to compete with other big parties that take place in the Northeast of the country. Check out the attractions:

The Parque de Exposições de Salvador will have 5 days of celebration, starting on June 20 and should be amended with São João do Pelô, a traditional commemoration of the Historic Center of Bahia.

The capital of Bahia stands out for being the city with the biggest June parties in Brazil.

Throughout the month of June, bonfires and colorful flags can be seen in every corner of Salvador. The performances of popular square dances take place in Pelourinho and attract hundreds of tourists and residents to dance to the sound of forró.

The June cuisine of Bahia is also indispensable: aluá, beiju, munguzá and green corn broth are some of the traditional dishes.

The event takes place on the Discovery Walkway.

Known as the land of forró, Ibicuí is one of the most popular destinations in the state for those who want to enjoy São João in Bahia.

The festivities of the time in São Luís are marked by the performances of bumba-meu-boi, which usually take place in squares in the center of the city.

The famous Balcão do Forró, a space where the trios perform, and traditional delicacies such as corn porridge and cuxá rice are the hallmarks of São João in São Luís.

With a different charm, who commands the party in São Luís is the traditional Bumba Meu Boi. In a festival marked by dances and rhythms, the story of the slave Catirina and her husband is told, who need to resurrect the animal they had killed.

Visitors can learn about dances such as the lelê, caroço, tape dance and Portuguese dance, in addition, of course, to square dances.

One of the most traditional events is the São João da Capitá, which takes place in Olinda.

More than 40 attractions will be presented in the scenic city and in Vila do Forró. The event has major national attractions, square dances, craft fairs, typical foods and much more.

Considered “The Biggest Junina Festival in the World”, the festivity in the city of Campina Grande takes place throughout the month of June. The square dances, accordion players and performances by artists such as Elba Ramalho, Zé Ramalho and Aviões do Forró attract tourists from all over Brazil.

The parties take place at Parque do Povo, a space measuring 42 square meters and hosting more than 300 typical food and beverage stalls. There is also the famous collective wedding, with dozens of couples who commit themselves amidst the rhythm of the forró pé de serra.

The city is famous for having expelled the gang from Lampião 80 years ago and, during June festivities, the residents' resistance is staged: the famous Chuva de Bala in the country of Mossoró. Typical food and performances by great national music artists also make Mossoró one of the cities with the liveliest celebration of São João.

The Festa Junina has its origins in European culture from the Middle Ages. It was brought to Brazil by Portuguese settlers, but it underwent several adaptations in our territory, where Brazilian traditions were incorporated.

Many years ago, in Portugal, the Festa Junina was called “Festa Joanina”, in honor of Saint John the Baptist.

The songs by Luiz Gonzaga (“o Rei do Baião”) are the most played in Brazilian Festas Juninas.

Festa Junina is the second most important Brazilian popular festival in Brazilian culture (after Carnival).

Corn is the base of many foods at Festa Junina, as it is this month that it is harvested.

The Northeast region of Brazil is the one that most celebrates the Festa Junina.

The quadrille is one of the highlights of the Festa Junina in Brazil. This dance emerged as a way of thanking the three Catholic saints (São João, São Pedro and Santo Antônio) for the harvest carried out.

The biggest Festa Junina in Brazil takes place in the Paraíba city of Campina Grande, gathering thousands of people every year.

– Images of the three Catholic saints of the Festa Junina

In the past, images of the three Catholic saints of the Festa Junina were painted on flags and scattered around the festival sites. Over time, these flags were transformed into little flags, which are still used to decorate party environments.

– Typical clothes of the Festa Junina

The typical clothes of Festa Junina are related to the way of dressing of the inhabitants of the rural area of ​​decades ago.

The bonfire, a striking symbol of the June festivities, is a tradition of pagan origin, which served to celebrate the summer solstice in the northern hemisphere.

The musical instruments most used to accompany the music of the June festivals are: guitar, viola, triangle, accordion, zabumba, tambourine and cavaquinho.

History of Festa Junina and traditions 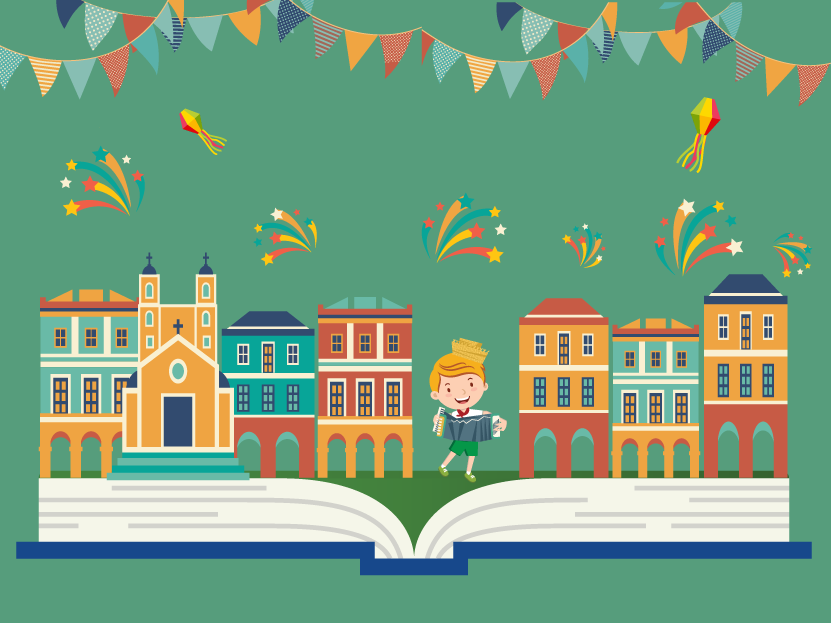 History and Origin of Festas Juninas in the Northeast

There are two explanations for the term festa junina.

The first explains that it arose as a result of the festivities that take place during the month of June. Another version says that this festival originated in Catholic countries in Europe and, therefore, would be in honor of Saint John. In the beginning, the festival was called Joanina.

According to historians, this festivity was brought to Brazil by the Portuguese, still during the colonial period (when Brazil was colonized and ruled by Portugal).

At that time, there was a great influence of Portuguese, Chinese, Spanish and French cultural elements. From France came the marked dance, a typical characteristic of noble dances and which, in Brazil, greatly influenced the typical square dances.

The tradition of setting off fireworks came from China, the region from which the manipulation of gunpowder for the manufacture of fireworks would have emerged. From the Iberian peninsula came the dance of ribbons, very common in Portugal and Spain.

All these cultural elements were, over time, mixed with the cultural aspects of Brazilians (indigenous, Afro-Brazilians and European immigrants) in the different regions of the country, taking particular characteristics in each one of them.

June Festivals in Caruaru and the Northeast