Fonte do Ribeirão is undoubtedly one of the tourist attractions in São Luís more well-liked by the Ludovicenses themselves.

Located between Rua do Ribeirão and Rua dos Afogados, the affective symbol of the city was handed over to the population after a long period of restoration carried out by the City Hall.

The fountain lost its primary use, which was the water supply in the city, as happened with several other fountains in the capital, and today, more than 200 years after its opening, it serves as a backdrop for photographic clicks by tourists.

Built in 1796 during the government of Lieutenant Colonel D. Fernando Antônio de Noronha, who yearned for better sanitation in the region and improved water for consumption, it is remembered in several stories told by the people of Ludovica. 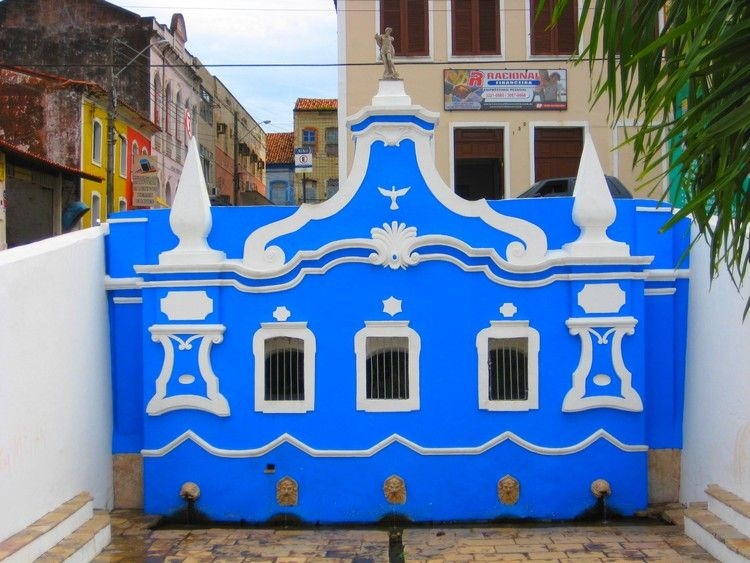 History of the Ribeirão Fountain in São Luís do Maranhão

One of them refers to the underground galleries approximately two meters wide by two meters high, which were once open to public visitation, but are currently closed.

It is said that these galleries were open for the movement of priests and friars between the churches in the city, so that they would not be seen by the population. Others add the Fonte do Ribeirão to one of the most famous legends of São Luís, that of the Enchanted Serpent.

The sleeping monster's head is believed to be there. Some claim to have seen the red eyes of the great serpent.

Architecture – Inserted in a vast courtyard covered with ashlar stones, the Fonte do Ribeirão is protected by masonry walls. Its sky blue facade in the background has a pediment decorated with pagan and Christian symbols, such as a dove of the Divine and on top a statue of Neptune in stone, the current one being a replica.

The original is in the possession of IPHAN, to prevent vandalism. Below are three windows closed by bars that give access to the aforementioned underground galleries.

There are also two ornate pilasters on the sides. Last but not least, the five famous scowls of the fountain in the form of fish and gods.

The scowls are made of stone and with bronze toe caps, from where the water is channeled and taken to the tank to then flow through a gully that runs along the entire length of the patio to the Anil River.

Take the bus to Av. Waterfront, get off in front of RFFSA. Go right, cross the road before the José Sarney Bridge where you will find Rua do Ribeirão. The fountain is at the end of the street.