Natural pools and the sea with few waves form the beach scene of São José da Coroa Grande in the south of Pernambuco.

Hidden away on Pernambuco's so-called Costa Dourada, the small town of São José da Coroa Grande is halfway between Recife and Alagoas.

The coral formations that border the beaches form natural pools of transparent water, perfect for swimming, rafting or practicing activities such as diving and kayaking.

São José da Coroa Grande is the last city in Pernambuco towards the south, the smallest beach and the most populated.

Bordered by natural pools, the city has its name inspired by the crowns that emerge at low tides on the sandbanks between the seaside and the corals.

São José da Coroa Grande was part of the municipality of Barreiros in 1901.

In 1938 it was renamed Puiraçu, later returning to the old name of São José da Coroa Grande. It was constituted an autonomous municipality on April 11, 1962.

Located in Zona da Mata Sul, 123 km from Recife, São José da Coroa Grande has tourism as its main economic activity. With beautiful beaches and an expanding hotel sector, the resort is frequented by tourists from different parts of Brazil.

Agriculture is also a strong economic factor with the cultivation of sugarcane, sweet potatoes, bananas, coconuts and cassava. Artisanal fishing has potential for development.

Those who visit São José da Coroa Grande feel privileged by the beauty of its sea.

And the receptivity of the population. The beach, with its natural pools, is one of the favorite places for tourists.

For those who like to dive, the sea of ​​São José has clear waters, with colorful fish that eat in the hands of bathers. Even at high tide, the waters are always calm, ideal for sailing.

Another option is Várzea do Una, with beautiful landscapes. When you get there, a good option is to taste a crab or aratú stew. 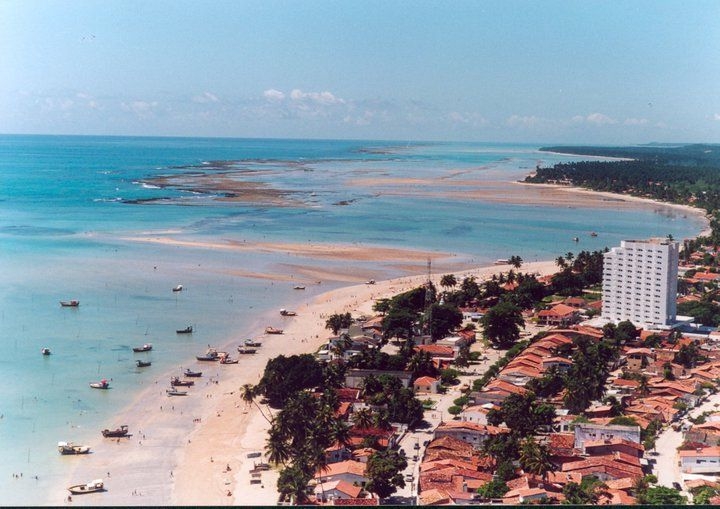 The coral formations that border the beaches form natural pools of transparent water, perfect for swimming, rafting or practicing activities such as diving and kayaking.

Surfing fans, however, are also present in the region.

The beach in the village of Várzea do Una offers good waves and often serves as the setting for regional sport championships. Hiker and rally enthusiasts can find trails around the same beach.

Gravatá beach is located in the Abreu do Una district, where at the time it connected Barreiros to Vila do Gravatá, through which sugar was transported from the Barreiros Central Plant to the Gravatá Port by locomotive.

The port was built of wood where the barges that transported sugar to Recife and from there to Rio de Janeiro were moored.

The church was built by dutch, with São Benedito as its patron, is located in the district of Abreu do Una.

In 1961 it was demolished by the plantation owner known in the surroundings as Otávio and a new chapel was rebuilt higher up in honor of São João Batista.

In the locality there was a very popular festival, which was the feast of kings, because it was traditional and everyone celebrated a lot. The church of Abreu was a mill chapel, built by the mill owner in the 20s of the last century.

The village also houses the Una Museum, with a collection made up of maps, nautical charts and local handicrafts. The village also offers boat trips through the mangrove swamps, forró on the weekends and stalls that excel in recipes based on shrimp, crab, octopus, crab and aratu.

The museum is located in the district of Vázea do Una in São José da Coroa Grande - PE, founded on April 22, 2000 by Bertrando Bernardino, with the aim of serving as a shelter and preservation of regional culture and the environment. Inside the Una museum, we find the moonfish, one of the two specimens exhibited in Brazil, the other in São Paulo.

The property is located about 6 km from the PE 060. Engenho Morim was founded in the XNUMXth century by the Baroness of Gindahy.

The existing constructions include the big house, stable, acaricide bathroom, dunghill, thicket and residents' houses, which preserve the original architectural lines. You can also see the ruins of the chapel, in front of the big house.